Even forecasts for all the data published yesterday indicated that the correction in the currency market will have to wait a little while and while the dollar will continue to lose its position. This is what happened, although absolutely all published macroeconomic indicators did not coincide with the forecasts at all. 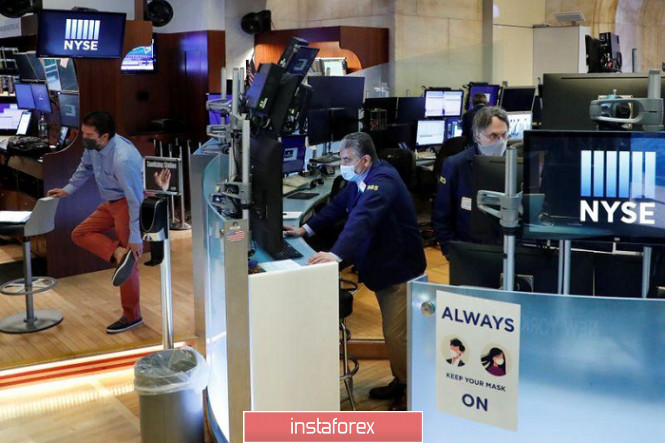 The European statistics completely delighted the market participants, which, by the way, later helped the pound too. Although it all started not so rosy. The fact is that the index of business activity in the service sector rose from 48.3 to 54.7. The growth is impressive, but the preliminary estimate promised growth to 55.1. But even at the time of the publication of preliminary data, this slightly larger growth was included in the cost of the single European currency. Yet, the situation was saved by the composite index of business activity, which was supposed to grow from 48.5 to 54.8, but in fact, it grew to 54.9. Anyway, the indices have risen above the 50-point mark, which separates stagnation from growth. So all is well. However, disappointment from the index of business activity in the service sector still led to a halt in the growth of the single European currency, which resumed only after the publication of data on retail sales. After that, growth did not stop. Firstly, the data for the previous month was revised for the better, and the rate of decline was then not -5.1%, but only -3.1%. Second, it was expected that the decline will be replaced by growth, the rate of which was supposed to be 0.2%. But it turned out that the growth rate was as much as 1.3%. Apparently, there was a sharp transition from a serious recession to moderate growth, which delighted market participants. 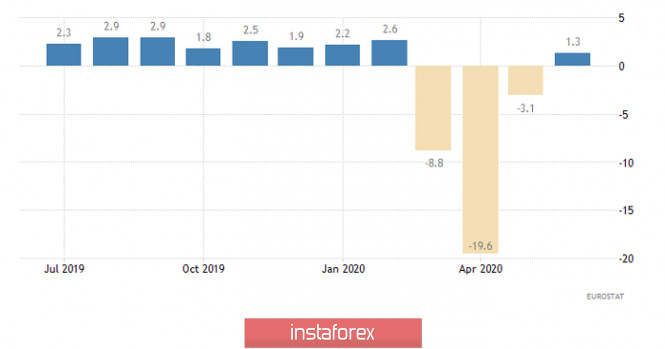 British statistics almost completely coincided with forecasts, although it turned out to be a little worse. Thus, the index of business activity in the service sector rose from 47.1 to 56.5 against the forecast of 56.6. The composite PMI, which was supposed to rise from 47.7 to 57.1, rose to 57.0 which is slightly worse than expected. But again, the indices climbed above 50 points. Nevertheless, this small discrepancy, not only halted the growth of the pound, but even led to its symbolic weakening for some time. This quickly gave way to growth. The pound followed the European currency, which began to rise after the publication of data on retail sales. 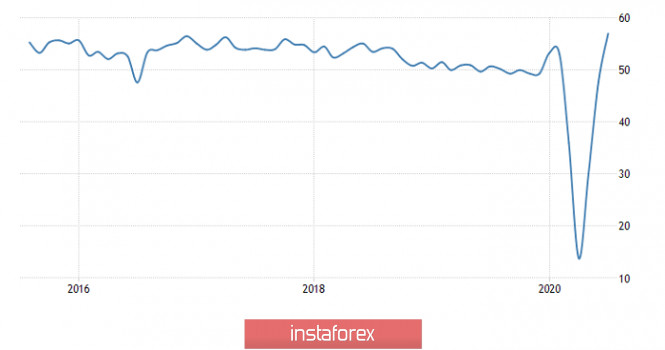 But the most interesting changes occurred with American statistics. Contrary to all fears, the final data on PMIs turned out to be slightly better than preliminary estimates. Thus, the index of business activity in the service sector rose from 47.9 to 50.0, although, according to forecasts, it should have increased to 49.6. The composite PMI, which was supposed to rise from 47.9 to 50.0, rose to 50.3. And in theory, all this is just wonderful and should have led to a noticeable strengthening of the dollar. But in fact, this only slightly smoothed out the negativity caused by the ADP data on employment. This very employment was supposed to grow by 1,550 thousand, which is still considered insufficient in the current conditions to restore the labor market. However, employment grew by only 167 thousand, which, of course, in the conditions of record high unemployment, looks more like a mockery. Thus, the dollar had only one thing to do - to continue to lose its positions. Moreover, everyone has in mind the forthcoming publication of the report of the United States Department of Labor. 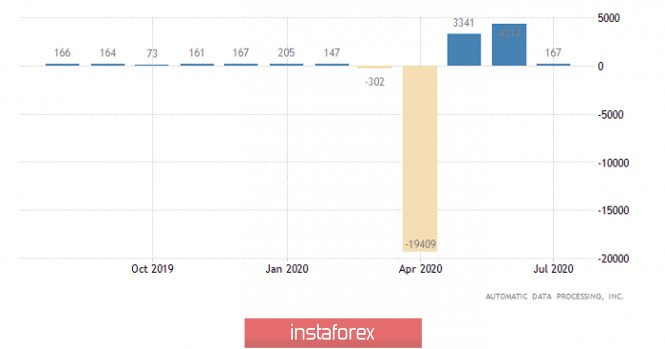 If the pound grew noticeably more than the single European currency yesterday, then today it is the market leader from the very morning. The Bank of England needs to be thanks for this, which held a fairly early board meeting. It's so early that its results became known shortly before the opening of the European session. At the same time, all parameters of monetary policy remained unchanged. But there were strong fears that in the current conditions, especially around the upcoming Brexit, and the prospects for the UK to remain without full-fledged trade agreements with both Europe and the United States, the Bank of England could expand stimulus measures, but that did not happen. Moreover, the Bank of England has assured everyone that it does not plan to soften its monetary policy in any way. Apparently, the Bank of England's policy will remain unchanged until the end of the year. And from the point of view of investors, this is nothing more than stability and predictability. And these are the things that everyone is missing right now. 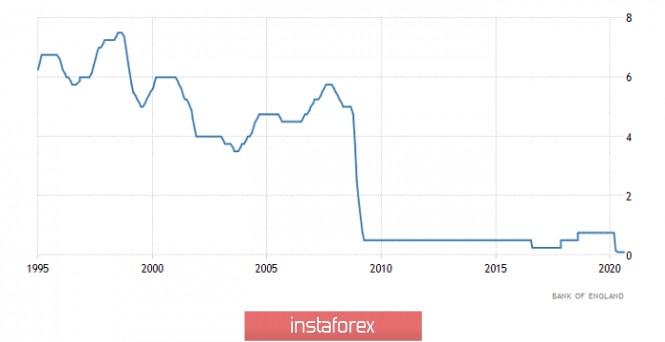 The dollar still has a chance today to somehow change the course of events. Indeed, before the publication of the report of the Ministry of Labor, data on applications for unemployment benefits are very important. And on the one hand, everything is pretty bad, since the number of initial applications may grow from 1,434 thousand to 1,450 thousand. However, repeated applications have much more weight, the number of which should decline from 17,018 thousand to 16,900 thousand. Of course, after yesterday's ADP data, there is every reason to believe that the data will not be quite as expected. Thus, it's better not to run ahead of the driver and act after the fact. 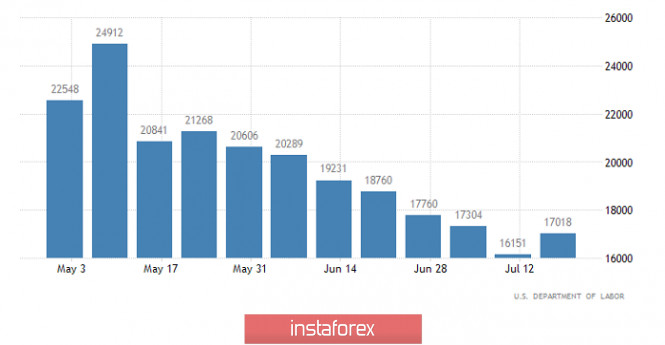 The euro/dollar currency pair found a resistance point in the face of a maximum on July 31 - 1.1908 during a sharp upward move, where a rebound occurred on a natural basis. We can assume a temporary price fluctuation within the values of 1.1855/1.1910, where, depending on the fixation points, the subsequent move will be clear. 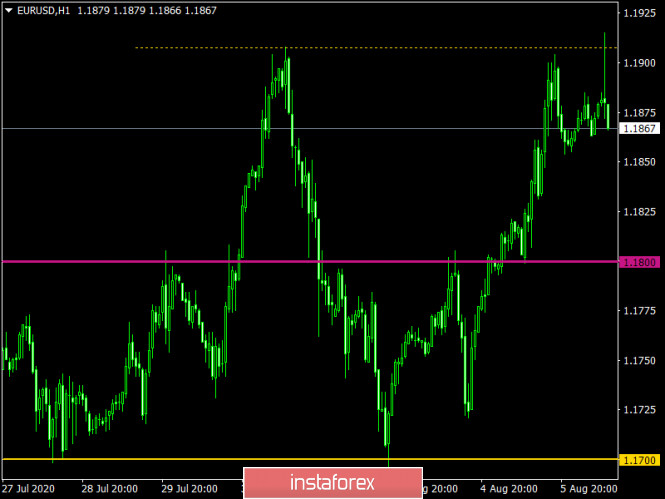 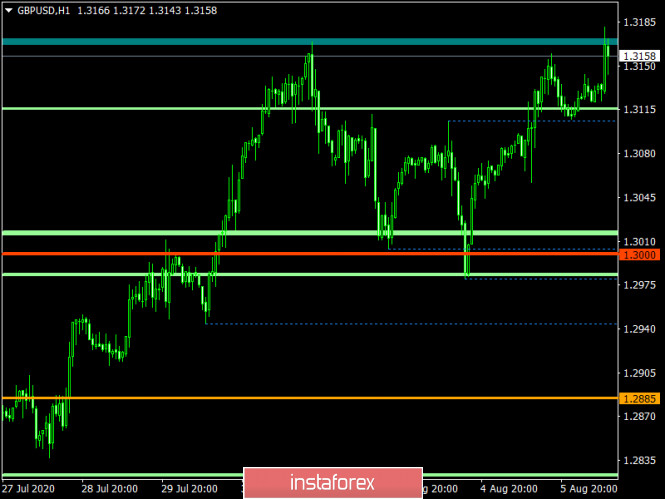