Analysis of EUR/USD and GBP/USD for August 6. Dr. Anthony Fauci: Testing for coronavirus as it is now is basically meaningless 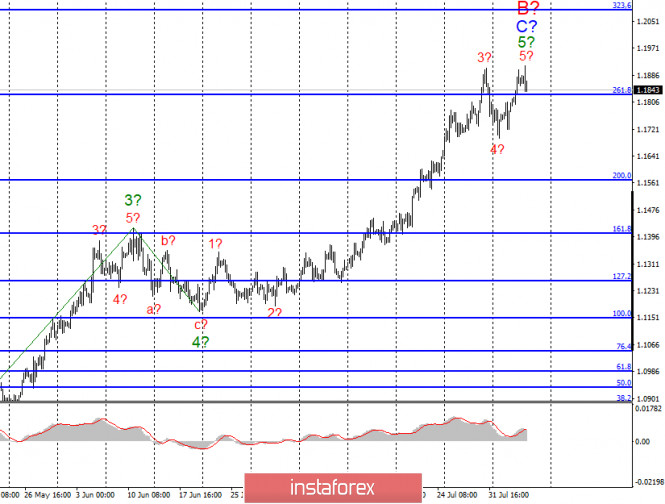 On August 5, the EUR/USD pair gained about 60 pips and presumably completed the construction of wave 5 at 5 at C at B, since the quotes began to move away from the previously reached highs already today, and the current wave counting took a fully completed form. If this assumption is correct, then the decline in quotes will continue with targets located around 15 and 16 figures as part of the construction of a new downward trend section, which, in turn, may also take a very extended form.

Yesterday was fairly neutral in terms of information. There were a lot of news and economic reports, yet none of them were "loud". Thus, the markets considered that there is still an opportunity to buy the European currency, especially against the background of the current wave markup, which implies the construction of a new downward trend section. The most interesting topic of the coronavirus epidemic in the United States began to gradually disappear from the front pages of newspapers. The number of cases of diseases is gradually decreasing, and many States have weak quarantine restrictions and two-week isolation for those who cross state borders. However, these measures are extremely weak in order to stop the spread of the COVID-19. All Donald Trump speeches regarding the virus and pandemic in America are not taken seriously by the markets, since their essence is very different from reality. Meanwhile, Dr. Anthony Fauci, director of the US National Institute of Allergic and Infectious Diseases, said that there was basically no point in testing for coronavirus. Fauci believes that each test takes too long to perform, which makes it impossible to conduct it, because until the results are known, a potentially infected person can infect as many other people as he wants. "Testing for coronavirus should take no more than 10 minutes to be effective," said Dr. Fauci. Economic reports yesterday created moderate pressure on the dollar. If the indices of business activity in the US service sector were at a fairly high level, especially the ISM index, then the ADP report on the number of employed in the private sector was frankly weak.

The euro/dollar pair has presumably completed the construction of the upward wave C in B. Thus, at this time, I do not recommend new purchases of the instrument, but I recommend closing the old ones. I also recommend starting to look closely at sales with the first targets, which are about 15 and 16 figures, since the instrument can now move on to building a global wave C. 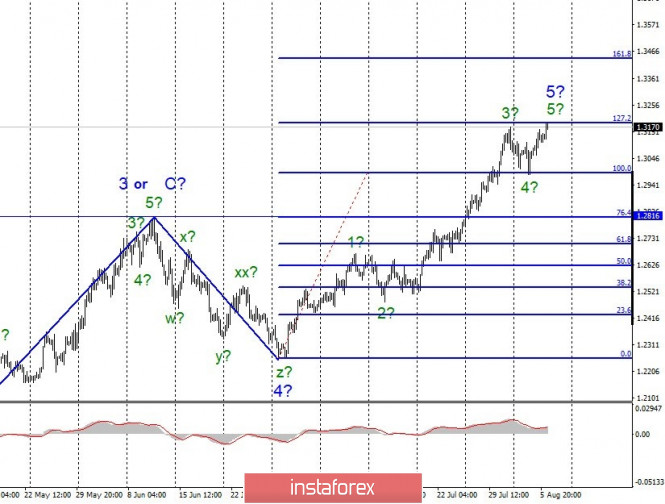 On August 5, the GBP/USD pair gained about 40 pips. Thus, the instrument rose to the level of 127.2% Fibonacci, and made an unsuccessful attempt to break it at the moment. Thus, around this level, the increase in the instrument quotes may end, since the entire wave 5 has taken on a fairly full-fledged form. If this is true, then the construction of a new downward trend section will begin already from the current price values.

The demand for the US currency declined again and was paired with the pound for the same reasons. Today, the results of the meeting of the Bank of England were summed up in Great Britain and it became known that all the main aspects of monetary policy remained unchanged. Nonetheless, the concerns of the markets that the Bank of England may resort to easing monetary policy during 2020 remained. The results of the meeting had no effect on the British pound. On the contrary, the pound continued to be in demand early this morning.

The pound/dollar instrument is expected to have completed an upward wave 5 around 1.3183. Therefore, I recommend at this time to close all purchases at least until a successful attempt to break through the 127.2% Fibonacci level and tune in to a possible long-term decline in quotes within a new downward trend section with the first targets around 27 and 28 figures.